2018 was a historic year, as NOMA commemorated the New Orleans Tricentennial and celebrated major accomplishments at the museum. In honor of the Tricentennial, NOMA set a goal to welcome 300,000 visitors to the museum in 2018. We exceeded the goal, attracting more than 319,000 visitors over the course of the year.

In January, we broke ground on the expansion of the Sydney and Walda Besthoff Sculpture Garden, a project that more than doubled the size of the existing garden, which is widely recognized as one of the top sculpture gardens in the world. The expansion—a gift to the city in honor of the tricentennial—was also the first major capital project NOMA has undertaken since 2003, when the museum opened the original garden.

When planning the expansion, we paid particular attention to integrating native Louisiana landscape and making a positive environmental impact. In addition to siting sculpture in a variety of settings, the sculpture garden expansion features an innovative weir, supported by the Patrick F. Taylor Foundation, that allows for changes in water level to address flooding potential and re-oxygenate the lagoon system. A canal link bridge, made possible by the Charitable Lead Annuity Trust Under the Will of Louis Feil, connects the existing sculpture garden and the expansion. This structure dips into the lagoon, taking visitors down to the waterline and creating the unique experience of walking through water. The canal link bridge is 280 feet long and is the first design of its kind in the United States and only the second of its kind in the world. An amphitheater and the Paulette and Frank Stewart Outdoor Classroom will provide opportunities for expanded public and educational programs. The garden expansion features 27 new works, three of which were commissioned as site-specific works: a glass bridge inspired by the Fisk maps of the Mississippi River by Elyn Zimmerman, which was supported by Donna Perret Rosen and Benjamin M. Rosen; a glass mosaic by Teresita Fernández; and an installation in the sculpture pavilion by Maya Lin. Lead gifts to the expansion were provided by Virginia Besthoff, the Collins C. Diboll Foundation, the estate of Margaret B. Soniat, and the Ella West Freeman Foundation.

Visitors to the sculpture garden expansion will also enjoy strolling the Young Fellows Meditation Path near sculptures by Gerold Miller and Tony Cragg. A group of nearly fifty young professionals came together to name the path, the first fundraising effort of this kind for the museum. Chaired by Beth and Austin Lavin and Marshall Hevron, the group raised more than $40,000 – double their goal.

In 2018 NOMA featured a blockbuster exhibition schedule, including a fashion exhibition, A Queen Within: Adorned Archetypes, as well as two very different exhibitions that explored New Orleans’ history. Changing Course: Reflections on New Orleans Histories featured work by six contemporary artists, and The Orléans Collection highlighted selections from the magnificent collection of the city’s namesake, Philippe II, Duke of Orléans. Donors gave more than $640,000 to support these exhibitions. Two membership specials were offered during the runs of A Queen Within and The Orléans Collection, providing new and lapsed members the opportunity to join or renew their membership and receive three free months of membership. More than 1,000 people took advantage of the promotions, and as a result, the number of member households increased by more than 500 households — a 10 percent increase. We also hosted a Member Appreciation Night in August to thank our members for their support, with more than 250 members in attendance.

To meet our ambitious goal of increasing visitorship, the museum focused on raising awareness of exhibitions and programs via social media. For the first time, labels placed in an exhibition featured a call to action to post on social media. As a result, the hashtag #nomaoutsidein (for Carlos Rolón: Outside/In) was used over 700 times on Instagram, enabling NOMA to reach vast new audiences on the social platform. Additionally, NOMA worked with a team of influencers to help spread the word about the museum’s offerings and strategically reach selected target demographics. New Orleans bilingual beauty influencer Rocio Mora (@risasrizos) posted about Carlos Rolón: Outside/In to her predominantly local Latin American following of over 30,000 Instagram users, reaching thousands of people with messaging about NOMA’s first bilingual exhibition.

events, and interviews with artists and guest speakers. The print content was complemented by web exclusives in a digital edition of the magazine. The web edition, regularly updated throughout the year, features video uploads of lectures and Q&A transcripts of conversations with musicians, artists, dancers, and performers featured in Friday Nights at NOMA programs. The Fall 2018 edition of the magazine won a Silver commendation from the Southeastern Museum Conference.

NOMA’s website garnered more than one million page views in 2018 and became an expanded resource for purchasing memberships and store merchandise, and enrollment in various workshops. A special hub page featuring extensive research on the life and times of Philippe II was established for The Orléans Collection, and included a video tour of the exhibition. 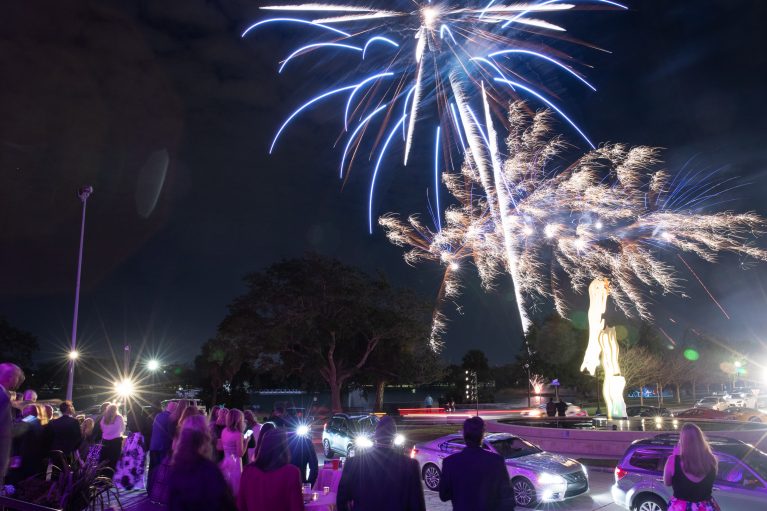 Fireworks lit up the sky for Odyssey 2019, with the theme All That Glitters

NOMA continued to serve as a cultural convener for the community. As a part of the tricentennial celebrations, NOMA was honored to partner with the City of New Orleans and the 2018 NOLA Foundation to welcome King Felipe VI and Queen Letizia of Spain to the museum for a cultural reception with the community. The event featured performances by Dr. Michael White and members of the Monogram Hunters Mardi Gras Indian tribe.

We also expanded the ways in which we offer a museum experience to the New Orleans community outside of the museum walls. Thanks to the generous support of Marjorie and Scott Cowen, we launched NOMA+ in April. NOMA’s mobile museum, housed in a customized fold-out trailer, was designed to be a “museum without walls” that literally pops up at sites across metro New Orleans. During 2018, NOMA+ featured two projects in conjunction with the exhibitions Changing Course: Reflections on New Orleans Histories and The Orléans Collection. In the first, through a partnership with The Everyday Projects and the New Orleans Photo Alliance, NOMA+ engaged community members at six partner sites to produce an installation of photographs for the Changing Course exhibition, in which participants shared images of their neighborhoods and experiences as New Orleanians. In conjunction with The Orleans Collection, NOMA+ used contemporary selfie culture as a way to explore portraiture.

NOMA’s commitment to educational programs was bolstered by a gift from trustee David Kelso and his wife, Sara, to create the David and Sara Kelso Endowment for Early Childhood Arts Education. This fund will support the innovative Mini Masters program, a collaborative arts integration program for pre-kindergarten students.

The NOMA Volunteer Committee (NVC) had another successful year, attracting more than 4,000 people to their four events: Art in Bloom: Queen of Arts, Celebrating 30 Years of Art in Bloom in partnership with IBERIABANK; NOMA Egg Hunt and Family Festival; LOVE in the Garden presented by Hancock Whitney; and Odyssey: All That Glitters in partnership with IBERIABANK. This year Odyssey featured a fireworks display, a special treat for patrons in honor of the city’s tricentennial. The NVC raised more than $1.17M in support for NOMA. These critical operating funds impacted all areas of the museum, from purchasing art supplies for our education programs to conserving beloved works of art in NOMA’s permanent collection.

Garden and Gun, March 9, 2018, On the Record: A new exhibit at the New Orleans Museum of Art shows some of the twentieth century’s greatest musicians in unguarded moments, by Caroline Sanders

Observer, May 16, 2018, A New Fashion Exhibition Aims to Show How the Industry Could Actually Be Inclusive, by Margaret Carrigan

The Art Newspaper, October 24, 2018, Highlights from Duke of Orléans Collection brought together for 300th birthday of New Orleans, by Victoria Stapley-Brown 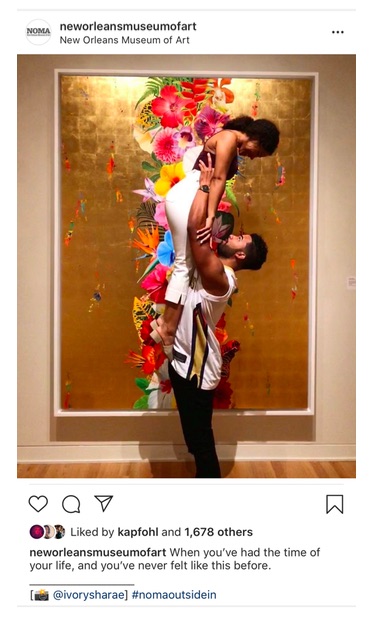 NOMA relaunched Pinterest in 2018 to promote the museum as a venue for private events. The profile garners 26,304 average monthly viewers.